chat_bubble Special Olympics Gold For Durham Softball Team [UPDATED]
Remember when Broadway's Ryan Colpitts pitched against the Falcons for an inning while playing for Coulas? Of course you do. Do you also remember that he did so because he needed practice because his softball team was going to the 2018 Special Olympics National Games? What an impressive memory you have.

Ryan's Durham team won Gold for Ontario, and it was the first time Durham had sent a team to the event.

In the Round Robin, the dominance continued.

Durham began that round strong, defeating Manitoba 23-1. They followed that performance up with another strong showing against Team Quebec with a 23-3 win.

The hometown team had a tougher time in their first game against another Ontario team, this one from Almaguin, but still managed to come away with a big 22-13 win.

This lead to the gold medal game against Almaguin. The juggernaut Durham team dominated again, winning 15-5 and striking gold.

I'd love to link to a major media article reported from the scene, but it doesn't seem that this event was covered at all. Kind of a bummer.

Fortunately for us, Ryan was keeping the world updated via Twitter:

For any of my friends that want to watch the Opening Ceremonies on Tuesday, here is the link... https://t.co/EdU4gvZWfT


Want to get an athlete perspective from the National Games? Go follow Special Olympics Canada on Instagram :) https://t.co/KRcyLKtU5D

Game Day! Gold medal match in the @SpecialOCanada Summer Games in #softball. Game takes place 10:30AM Ontario time. Always gotta get focus with the @arkellsmusic rocking in the background ✊🏻 pic.twitter.com/HTyxJOYn0v

Will they be able to repeat next year? Can't wait to find out!

Update from the man himself:

"Also just a side note, we are doing fundraising to get championship rings. If you could reach out to your team and see if anyone would be willing to donate $5-$10 to go towards that, it would be greatly appreciated." 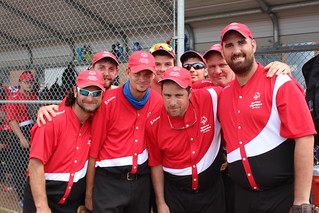