No one ever makes the conscious decision to wake up one morning and be terrible. Ineptitude can be thrust upon a team, and almost nothing they do can shake it. So it was that the Falcons showed up, all 16 of them, Saturday morning to take on the #8 seed IG Wealth in game one of their round robin. IG had 11 guys, and wasted no time letting the Falcons know how this game was going to go. They scored 6 in the top of the first, and held the Falcons to only 3 as a rebuttal. The Falcons couldn't get anything going: At most, they sent 7 men to the plate in an inning, which isn't a recipe for success. IG scored in every inning except the seventh when they were up by a ton anyway, and won a laugher.
IG Wealth 24, Falcons 10.

Things didn't get any better for the Falcons in game two Saturday. The Rebels scored early and often, and their defence was sound. They held the Falcons to only 8 runs, and scored 12 of their own to win Pool C and avoid a dreaded crossover elimination game Saturday afternoon.
Rebels 12, Falcons 8.

After the crossover seeding shuffle, the Falcons ended up as the #8 seed. Re/Max ended up as the #9 seed, and even though they had actually won a game so far, were the visitors to the winless Falcons. Re/Max took advantage of a Falcons squad down three players from earlier in the day: The Mattural, Goliath, and Dance Dad all had plans, obviously made in anticipation of the Falcons winning their pool and not having to play this blasted crossover elimination game. Re/Max went up 7-2 early, and things looked bleak for the home team. The Falcons haven't been eliminated on Saturday since 2010, and through sheer grit, that trend would continue. The Falcons girded their loins, got their heads out of their asses, and started hitting. This game was a turning point for the Falcons playoff weekend, though none of the team knew just how far they'd go.
Falcons 23, Re/Max 10.

Quarterfinal: Sunday, 10:00 am: Falcons at Storm

Amazing the difference a day can make. As the lowest remaining seed after Saturday's elimination games, the Falcons would be visitors all day Sunday. That would give them the chance to do what teams did to them, all day the day before: jump out to an early lead in the first inning and maybe get the home squad on their heels. And lo, it came to pass... Sort of. The Falcons "jumped" out to an early 2-0 lead after their first inning at-bats, and thanks to some fancy defence that was completely absent 24 hours prior, held Storm to a doughnut in the bottom half. It's amazing what a tiny bit of momentum can do for a team. As the underdogs, the Falcons were loose and relaxed. In the second inning, the bottom of the batting order came out like gangbusters. The first seven Falcons' hitters scored, putting the visitors up 9-0. Storm is a league powerhouse that can usually score at will, and in bunches. But in this game, for whatever reason, it wasn't working for them. The Falcons held them scoreless until they put up a 5-spot in the fourth inning, which cut the Falcons' lead to 11-5. With the Falcons pounding the last 3 nails in their coffin via singletons in the 5th, 6th, and 7th, Storm needed a big inning to continue on.

But the Falcon defence held. Storm put up a run in the seventh inning, and a near-catastrophic collision on the final out on a fly ball to right-centre field ended their playoff hopes.
Falcons 14, Storm 6.

The Falcons, embracing their newfound status as playoff underdogs, looked forward to avenging their humiliating loss to IG Wealth only 28 hours prior. This game turned out to be the exact opposite of the first: The Falcons jumped out to a 4-1 lead after the first inning, and began piling on with five more in the second. IG came back with one of their own, and after holding the Falcons to a delicious doughnut in the third, and only 2 in the fourth, put up a 3-spot in the bottom of the fourth. Even though after 4 innings the visitors lead by 10, it was tense. Even the shortest of memories could clearly recall IG's pummeling of the Falcons the day before, and so their foot metaphorically pinned the accelerator to the floor. A 4-run fifth and a defensive hold increased the Falcons' lead to 19-5 after 5, but momentum shifted to the home team in the sixth: The IG defence held firm in the top of the sixth, and they scored 3 runs on 5 hits as the rain continued to deteriorate the field conditions. Going into the final inning, IG needed a stop. And at first, it appeared as if they might get it. After an opening single by Dr J, IG retired the next two hitters on fly-outs. But that brought up the top of the Falcons order, written fortunately by Hobo, and not SLF. Cowboy singled, Grahambo walked, and now IG had a decision to make. It's absolutely great to see everyone taking a recreational beer-league semi-final game so seriously: After a lengthy meeting on the mound, wherein IG discussed, presumably, whether to intentionally walk Goliath, Barry Bonds-style, it appeared they decided NOT to give DC the free pass, but to pitch him completely unhittable pitches in hopes he could run into an out. He didn't. Goliath walked on 5 pitches, to bring up The Mattural, hero to all. On the second pitch he saw, Matt drove the dagger deep into IG's hopes with a no-doubter of a grand slam over the right field wall to pop all of the home side's balloons.
Falcons 24, IG Wealth 9.

The Falcons had been here before. In 2009, they lost to Coulas in an extra-inning game in which the Falcons lead after seven. In 2011, they lost to Xtreme (now Re/Max), again in nine innings after leading after seven. In 2013, the Falcons got steam-rolled by the A's. And in 2014, they met the same humiliating fate against the Devils (now Brew Crew). No team has lost two Playoff Tournament Final games by double-digits, except the Falcons. Every team in the league, save for the Falcons, had won the playoff tournament in the 21st century. To win it, the Falcons would have to defeat the favoured Hanet Plastics, who have had their number in playoffs past.

As with their previous two games, the Falcons put up a number in the opening frame. A two-run blast for Goliath scored Grahambo who had doubled. The Falcons spirits had lifted, if only a little. That all came crashing down in the bottom of the first inning. Hanet sent 10 men to the plate and scored 5 of them to take a 3-run lead. And it's this kind of thing that had resigned Falcons teams in the past to settling for second best. They could have done exactly that, and let Hanet run all over them for the rest of the game... But they didn't.

In fact, the Falcons defence showed tremendous resolve, and Hanet wouldn't score another run the rest of the game until the bottom of the seventh when the late-arriving Adam Feret hit a home run in his only at-bat of the game.

The Falcons offence, on the other hand, got back to what got them here in the first place. Solid strings of hits up and down the batting order. Four hits in the third scored 2 runs. Six hits, including Goliath's second dinger of the game and a triple from Miner Leaguer, plated 4 more. And to cap it off in grand fashion, eight hits including Playoff MVP Mike "Poutine" Labrecque's grand slam in the sixth inning scored 7 runs.

On Saturday, ace defensive alignment specialist Hobo set the team up to switch between Teets and Poutine pitching all game in hopes that a different look every few innings would limit runs. The opposite occurred. On Sunday, the decision was made to go all in with Pou pitching until his arm fell off. And the decision paid off. Over the three games on Sunday, Mike allowed a total of 21 runs, three fewer than the Falcons allowed to IG Wealth in their opener the day before.

And so it was kind of fitting that Poutine caught the final out of the 2019 WMSPL Playoff Tournament Final, as Mike hit a chopper to the right side that eluded Band Camp but was corralled by Dr J, who flipped it to Poutine to erase a thirty-six year championship drought for the Falcons.
Falcons 15, Hanet 6.

The League's playoff archives only go back to 2008, so a history lesson here is brief: The 2019 Falcons are the first team to lose both their round robin games and rebound to win the tournament. They're also only the second team to have won a crossover elimination game and win the whole thing.

Ladies and Gentlemen, fans and haters, your 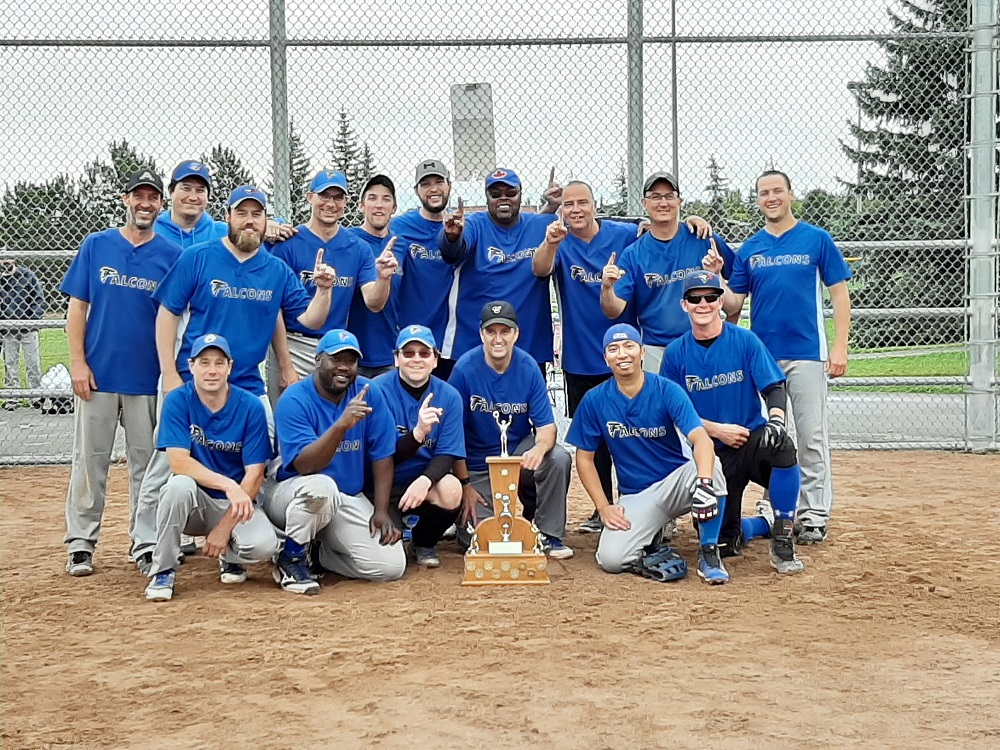 Today's history lesson research brought to you by Miner Leaguer, so if it's anything less than 100% accurate, blame him.

Thanks Larry! I have to say it was flattering that the longest scouting reports you gave your team on Saturday afternoon were for my at-bats!

Hi, this is Stumpy.
You might remember me from such famous podcast as "The Falcast" with famous quotes like "you know when you get shot in the back" or "The Falcons will win it all". Well guess what, Stumpy was right.
The falcons won it all. Never mind that i was a few years off. But this year, i predicted to SLF verbally, which he apparently no longer remembers, that the Falcons will be the 2019 Champions. And I was right.

Congratulations to the falcons!!!

Is jon’s Head photo shopped on there?

It certainly looks that way, but no I was there in the flesh. I would have sent a better pic for photo shopping purposes.

Great season by all. My favorite teams this year were Brew Crew (walk up music yes!) and Remax (this squad is never boring).

Win or lose, had a great time with this team this year. Not a single rotten apple in the bushel.

Just shows that the first two games of the playoffs don't mean anything. If the bats are going strong anything can happen. Enjoy the winter because next year teams will be coming to take your title.

The 2019 WMSPL season only ended a few hours ago, but it's never too early to start thinking about next year.

Representatives from Bet 365, Sportsbook.com, Pinnacle, 5Dimes and Dougothy Casino met last night and have released available bets for the 2020 season including the Falcons ability to repeat as League Champs.

Go poutine - your like the son I always wanted

I always knew you guys had it in you!!!! I'm so proud of you all and you deserve this awesome win

Good job daddy - You deserve it

Fun season guys and lots of great memories. If we’re taking turns bringing the trophy home, maybe Jeremy should get it last just in case he spoons it to sleep at night like Ovi did with the Cup.

"IF"... I tried to pass around the VP trophy last year, and all I heard was crickets. Now you guys want to show off the broken trophy?

Another thing that lasts forever is Jeremy's Falcon rookie card, which has since quadrupled in value since winning the Chip on Sunday: